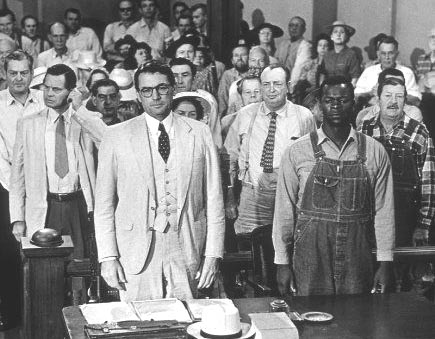 PRINT CONDITION:
To Kill a Mockingbird is particularly sharp and detailed. This is because it derives from an original source from when the film came out in cinemas in 1962 and then subsequently held in film libraries for release to film clubs a couple of years after, so there is no diminishing of the image from reissues and multiple copies you find with recent prints of older films. It compares very well to a 35mm print I saw in the cinema particularly the 'rabid dog' sequence that has the animal in extreme long shot and this 40 years old print realy does show the detail which is at the limits of what you would expect from 16mm. The lab work was at Hendersons in 1964 - they specialised in B/W prints for the film libraries of the day. It is on four 1,600'ft. reels, (129" minutes). I believe this is print copy number "4" from a feature film distribution library in Scotland in the 1960's. It appears not to be a TV print as there are no inserts for adverts and the contrast and shadow detail are not low as is found on TV prints. The film stock, where marked, is Kodak date marked 1964 and Gevaert 1S black and white positive print stock. Film base is thick acetate. No shrinkage or warping. There are wear lines and joins consistent with projection use over the years and with worn sections of the print being replaced with new sections inserted. No actual jump cuts, but the joins are both noticeable and audible where they occur. The film base appears to have been treated with a protective coating layer. It is the complete feature with opening Universal logo (Elmer Bernstein's title music begins as the "Universal" logo fades). The print is theatrical density, excellent contrast and sharpness with excellent sound in close synch. Projects very well.

Visit Current MAY 2022 LIST OF 16mm FILMS FOR SALE

For further details about any of the above: